0
464 Views
0
Warning: json_decode() expects parameter 1 to be string, object given in /homepages/8/d668141621/htdocs/clickandbuilds/WordPress/MyCMS2/wp-content/plugins/posts-social-shares-count/classes/share.count.php on line 66
0
Shares 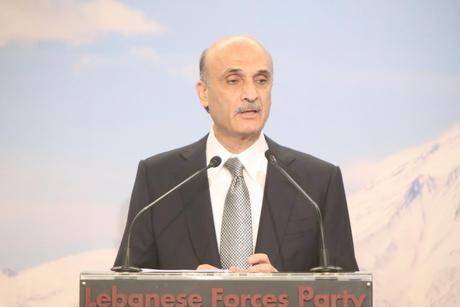 Lebanese Forces leader Samir Geagea on Friday described the suspected chemical attack in Syria’s Idlib and the deadly bombing that hit Shiite Syrian evacuees as a continuation of the massacres that started with the April 1915 genocide of Armenians under the Ottoman Empire.

“Since April 24, 1915… massacres have continued across the globe, the last of which was the Khan Sheikhun massacre, seeing as the international leniency in fulfilling justice regarding the Armenian massacres has encouraged tyrants and oppressors to carry on with their crimes until the moment without fearing punishment,” said Geagea at a Maarab rally marking the 102nd anniversary of the Armenian Genocide.

“The winds of evil that lashed Armenians a century ago have returned in a new round and in new forms to hit other places and peoples. The targeting of civilians with chemical weapons that happened days ago in Khan Sheikhun — and previously in Aleppo, Eastern Ghouta and other places – and the terrorist bombing against innocents, women and children from the residents of the towns of Fuaa and Kfarya are only different manifestations of the Armenian massacres,” Geagea added.

Turning to the domestic situation, Geagea said “the LF’s strength does not come from the number of its ministers or MPs despite their importance, but rather from its legitimacy, credibility and the firmness of the foundations it was built on.”

“It has the ability to speak to the national conscience without any complex, because it is the daughter of Bashir (Gemayel) and March 14,” the LF leader added. 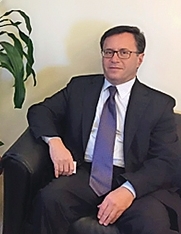 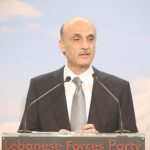