0
615 Views
0
Warning: json_decode() expects parameter 1 to be string, object given in /homepages/8/d668141621/htdocs/clickandbuilds/WordPress/MyCMS2/wp-content/plugins/posts-social-shares-count/classes/share.count.php on line 66
0
Shares 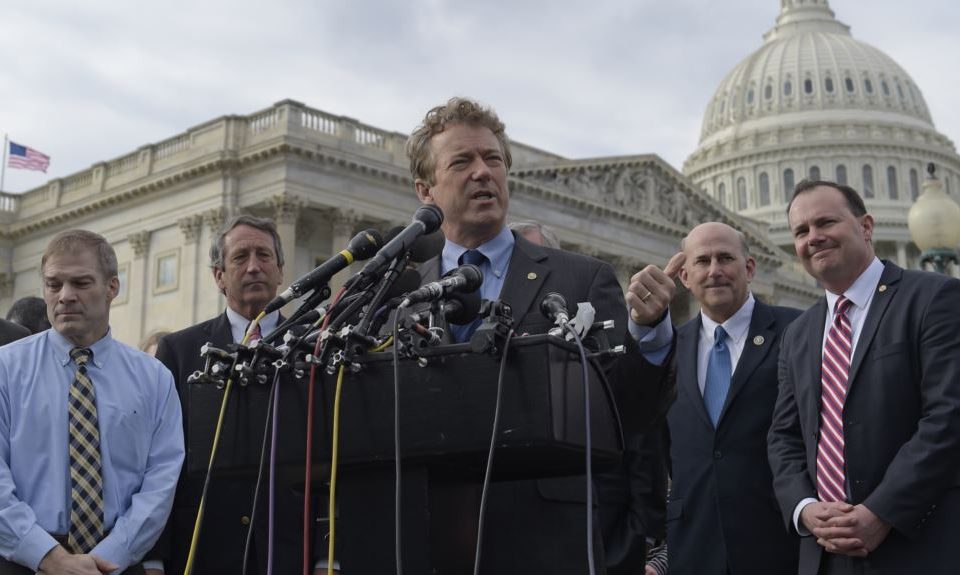 CAPITOL HILL — A Republican plan to eliminate and replace major portions of former President Barack Obama’s signature domestic achievement, the Affordable Care Act, has been savaged since its release earlier this week on Capitol Hill, presenting an early test of Republican governance.

“A step in the wrong direction … a missed opportunity.”

Those words were uttered by Republicans: Senator Rand Paul of Kentucky, Senator Mike Lee of Utah, and Congressman Louie Gohmert of Texas, respectively.

Democrats also have blasted the plan, but rifts among Republicans, who control both houses of Congress, ultimately could sink their party’s push to make good on a central promise to voters: repealing and replacing Obamacare.

“Republicans are not expecting to get any Democratic votes, so they have to figure out how to resolve internal divisions in order to have any hope of getting anything done,” said political analyst Molly Reynolds of the Washington-based Brookings Institution. 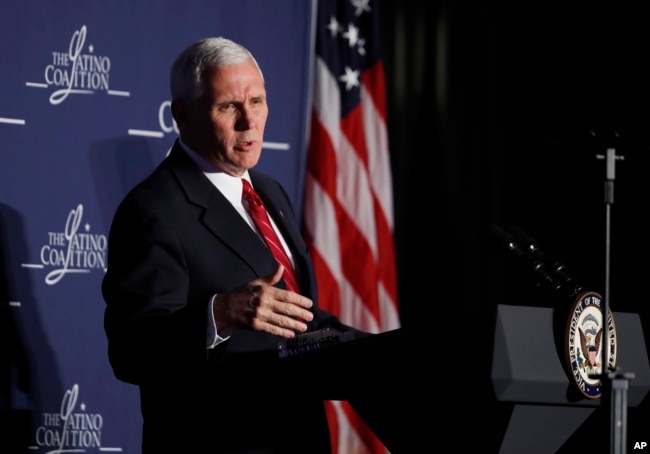 So far, backers of the bill — the American Health Care Act — are undaunted.

As a candidate and as president, Donald Trump repeatedly branded Obamacare “a disaster.” Senate Majority Leader Mitch McConnell of Kentucky said Republicans have no choice but to repeal it.

“The status quo is unsustainable. We cannot sit on our hands and do nothing,” McConnell said. 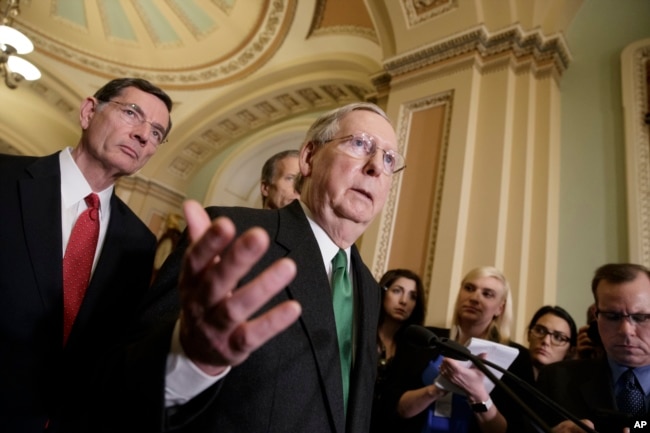 But if Republicans are united in portraying the Affordable Care Act, also known as Obamacare, as a catastrophic government intrusion into America’s health care system, they are anything but united about what should replace it.

For members of the ultra-conservative Freedom Caucus, the Republican bill preserves too much of existing law.

“There were many things that were in Obamacare that are still in the [Republican] bill,” Paul told Bloomberg Television. “The major taxes, all of them, are kept for a year. This is Obamacare-Lite.”

For moderate Republicans, the AHCA goes too far in dismantling the status quo. Senator Rob Portman of Ohio was one of four Republicans who wrote to McConnell expressing concern that a key Obamacare provision, expanding a federal health care program for the poor, would be gutted under the Republican plan, causing “a reduction in access to life-saving health care services.”

Political analysts note that Republicans promised for years to end Obamacare, but they waited until now to unveil detailed legislation to replace it. By not building party consensus ahead of time, Republicans ensured that rifts would emerge.

“There were certainly [Republican] plans that came out, but they didn’t do the hard work to get together on one page about what this [repeal and replace plan] would actually look like,” said Reynolds.

The Republican plan scored a minor victory Thursday when a House panel voted to scuttle an Obamacare requirement that Americans purchase health care insurance or pay a tax penalty, demonstrating once again that Republicans have ample votes to repeal current law. A formula for replacing Obamacare is proving far more divisive. 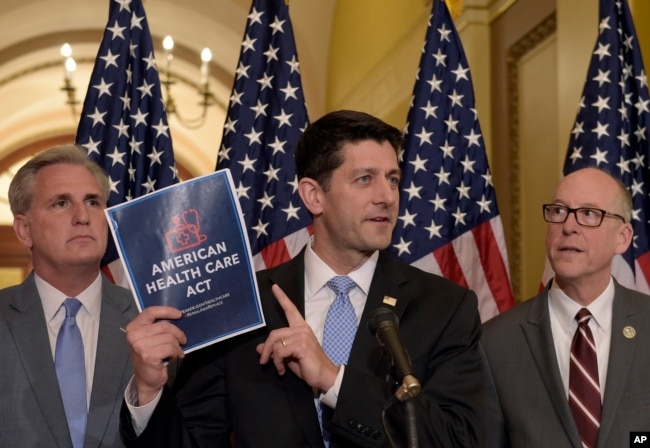 The bill’s proponents stress that the current draft is but a starting point and that lawmakers with concerns about the replacement plan can propose amendments.

“We’re certainly open to improvements and recommendations in the legislative process,” Pence said.

“There’s going to be plenty of opportunity for senators in both parties to change this bill,” McConnell said.

The political stakes for Republicans are potentially enormous depending on the outcome of the drive to reshape health care.

“We could see some real voter anger,” Reynolds said, adding that conservatives would be particularly dismayed if Republicans, even with control of the White House and Congress, were unable to deliver on a core promise.

In an unusual move, Republican advocacy groups that typically target Democrats are running television ads pressuring their own members to vote for the AHCA.

“It’s time for conservatives to unite behind President Trump and Speaker Ryan to pass the American Health Care Act,” concludes an American Action Network advertisement running in the districts of Freedom Caucus members. 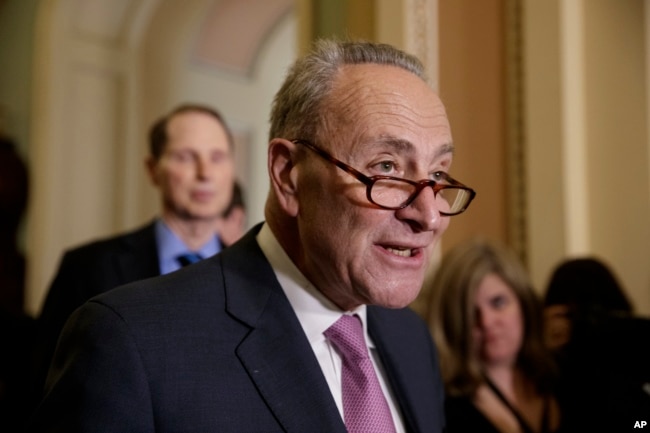 ‘Trumpcare is a mess’

Democrats, meanwhile, are seeking to ratchet up public opinion against the Republican plan, arguing Obamacare should be improved, not scrapped. Should Republicans succeed in repealing and replacing it, Democrats are preemptively assigning blame for any negative consequences, labeling the Republican plan Trumpcare.”

“The fact is, Trumpcare is a mess,” said Senate Democratic Leader Chuck Schumer of New York. “It’ll mean higher costs and less care for most Americans. Even a growing number of conservatives are expressing their distaste for the legislation.

“We Democrats will fight it tooth and nail. As people learn of this bill over the next few weeks, there will be rebellion in the land about it. They should listen to the voices coming from their own party, who say this bill will hurt their states and hurt the country,” Schumer added.

Post Views: 615
Warning: json_decode() expects parameter 1 to be string, object given in /homepages/8/d668141621/htdocs/clickandbuilds/WordPress/MyCMS2/wp-content/plugins/posts-social-shares-count/classes/share.count.php on line 66
0
Shares 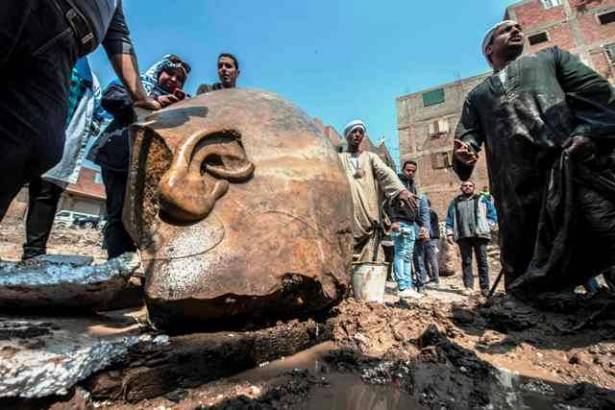 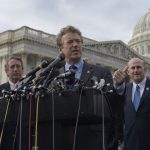